Deathryde: Rebel Without a Corpse 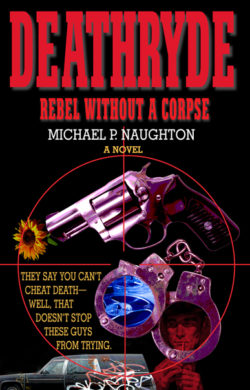 DEATHRYDE: Rebel Without a Corpse
by Michael P. Naughton

They say you can’t cheat death… well, that doesn’t stop these guys from trying…

ABOUT DEATHRYDE: REBEL WITHOUT A CORPSE

James DeRossa is a natural born rebel. Just released from Jackson County Jail, he turns his back on the family funeral business in Detroit and heads out to Tinseltown to set up a heist and settle an old score. Who better to hire than a group of unscrupulous undertakers. Only this time they aren t burying anyone, they’re out to disinter $25 million in missing cash and ice. But Detective Hank Gladwin brought his shovel to the party and is onto DeRossa when his list of suspects starts pushing up more than daisies. These felons are all about to join a deadly procession and one hell of a ride. DeathrYde: Rebel Without a Corpse is written in the hip, offbeat, satirical crime novel style of Elmore Leonard and Carl Hiaasen. Fans of Six Feet Under or Evelyn Waugh’s The Loved One should also appreciate this oddly entertaining book.

If you have a taste for slambang satire that plays games with the names of dead celebrities from James Dean to Barbara Stanwyck and a hearse driver with the marvelous name of Coffin Joe, Michael P. Naughton’s Deathryde: Rebel without a Corpse (Gilded Hearse Press, $12.95, 183 pages), is your kind of book. It’s the story of a gang of criminal undertakers engaged in a caper known as “Harold and Maude” involving a group of Hollywood funeral homes and an ancient but unforgotten mafia heist. Mr. Naughton is a professional screenwriter and you can tell. He is flip and quite often funny and understands the value of brevity as few current writers do. This is the kind of book that can even take your mind off flying as you try to decipher the short takes of the plot. —The Washington Times

Michael P. Naughton was born in Detroit. He is a mystery and satire writer who writes in the style of Elmore Leonard and Carl Hiaasen. He is also a professional musician and screenwriter, and had previously worked for Borders for many years and went on to publish actor Michael Madsen’s poetry and photography under 13 Hands Publications. Deathryde: Rebel Without a Corpse is his first book, written in the hip, offbeat style of Carl Hiaasen, Gregory Mcdonald (Fletch) and, of course, Elmore Leonard. Michael has also been a judge for the Benjamin Franklin Awards which honor the best in independent publishing, and was a columnist and contributor to The Beverly Hills Times Magazine. He lives in Los Angeles and is currently working on a mystery novel due out in 2018.